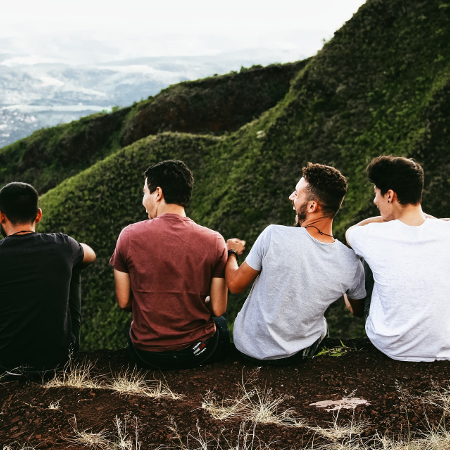 Creation might seem like a great place to start when you’re talking about all things religion.  After all, that’s where everything started.  Time, space, energy…  The trouble is that creation is an article of faith.  That means that unless a person has saving faith by the power of the Spirit, it will be a difficult and frustrating conversation.  That said, creation is not irrational.  On the contrary, there are many areas of creation that demand a creator.  The book I Don’t Have Enough Faith to Be an Atheist articulates some of the many problems that go into evolution.

Creation offers more than an explanation of how the world was created.  It answers basic questions that science can’t begin to touch.  Where did you come from?  Evolution cannot offer a beginning.  Why are you here?  Evolution would say luck, or I suppose if you pressed the point, you’re unlucky to be here.  Either way, it’s by chance.  Where are you going?  Evolution would say evolving, but there is no proof of macro-evolution.  Ethics and morals are terrifying because when evolution is pressed in on the topic a person can justify Nazi concentration camps and encourage abortion in America.

You are created by God as the crown of his creation.  You exist to give him glory.  He has preserved a place for you by his side, in his family, in his heavenly home.  Those answers roll of the page of Scripture and will fill your life with tremendous meaning.  The greatest truth that evolution doesn’t even acknowledge exists is that of the guilty conscience.  What is guilt if was are highly advanced pond scum?  When we don’t live up to the holy, perfect standards of our creator we feel guilt.  And, rightly so because anyone who does not live up to God’s standards will be lost forever.  This is where Jesus comes in.  God lived in your place and died in your place.  The punishment that you deserved, Jesus took on himself that you might be saved.  Yes, Jesus rose from the dead too, not in your place, but as the firstborn from the dead.  On the Last Day you will follow him and rise at the command of your creator.

Want to learn more about creation and what it means for your life?  Watch this Sunday’s Bible study from our series, By Grace Alone: Creation.