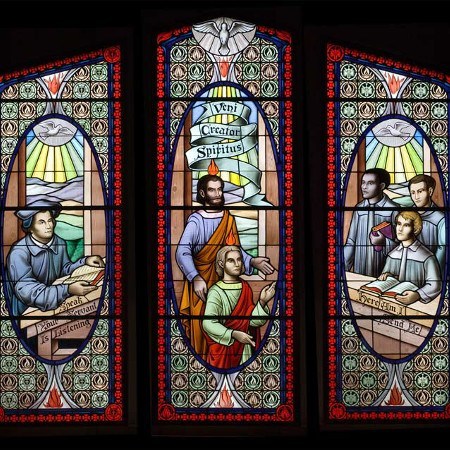 The Apostle Paul knew that he would probably never see the members of the Ephesian church again, at least not until heaven.  Acts 20 is a compelling historical account.  The bond between a called worker and the people whom God has given him to serve with the gospel is a special one.  It’s not uncommon for the called worker to be a part of the most important moments of their lives: births, baptisms, confirmations, weddings and funerals.  Those are just the big events.  There are so many little moments when the called worker has the opportunity to share a morsel of God’s will.  The nuts and bolts of the gospel ministry evoke a variety of emotions.  Just read the book of Acts as the New Testament Church gets started.

How does God place people into the public ministry?  This simple question may seem insignificant, but it’s an important topic as we consider the movement of clergy in our church body.  To start we need to go back to Acts 20.  Paul had started many different churches in his ministry.  He had appointed the elders in Ephesus, but in Acts 20 he says, “Keep watch over yourselves and all the flock of which the Holy Spirit has made you overseers. Be shepherds of the church of God, which he bought with his own blood.”  Even though Paul or someone else in the church was the one who did the appointing – as he and others did everywhere in the early church – he says that it is the Holy Spirit who gave them their position.  The call is divine, that is from God, but the means by which that call is extended is through the church.

If you would like to see the fruits of this practice in the WELS, check out this page on our synod’s seminary website.  You can even go back to 2002 and find my name.  The Conference of Presidents, the leaders of our church body, selects the graduates of Martin Luther College and Wisconsin Lutheran Seminary to be placed into different public ministries around the world for our church.

In my ministry in North Carolina I have met many pastors from various tribes of Christianity.  I have also met some individuals who after finding out that I am a pastor have told me that they wanted to serve a church but never felt “the calling”.  I have to confess that I have never felt “the calling”.  There have been some difficult days in my ministry when I wondered what I was doing and why I was doing it.  Those are the days it is important to look back at my call.  He is the one who wants me to do this.  This isn’t my idea.  You see the Lord Jesus could have knocked me out of my car one day, struck me with blindness, just like he did with the Apostle Paul in Acts 9.  That would be an immediate call, or one without means like the church.  Instead he extended me a call first through the Conference of Presidents, on behalf of Star of Bethlehem Lutheran church.

Since that first call I have received eight more calls, including the one I just received on Tuesday, January 16th, to serve Good Shepherd Lutheran Church in Omaha, NE.  That means that God has called me through the members of his church to serve two different places.  That doesn’t work so well.  After prayerful consideration I will return one of my divine calls.

How do I decide?  Now is a time for prayer and seeking the counsel of people at each church.  I reexamine my gifts and decide where God can best use me in his kingdom.  I also consider my family and the impact a move to Nebraska or staying in North Carolina will have on them.  Anyone can serve either church, but I am the only husband for my wife and father for my children.  There are opportunities for ministry in both locations.  Please keep me and all the men and women on the call lists in your prayers as we deliberate our place in God’s kingdom.  One thing I know is that God will bless me wherever I go.  Jeremiah 29:11 “For I know the plans I have for you,” declares the LORD, “plans to prosper you and not to harm you, plans to give you hope and a future.”

You can see all of the current calls in the call reports.  The information is usually delayed by a week or two.

You can see Call Day in action in the October 2013 WELS Connection.