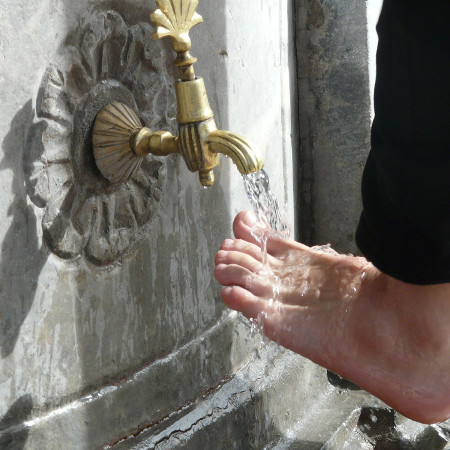 Traveling by foot in the ancient world wasn’t easy.  I can’t imagine their feet looked that great when you walked not to get 10,000 steps, but to get from point A to point B.  Foot care is still important today, but their lives were a little more challenging.  There were no paved roads.  The Romans were famous because they actually build some roads.  However for most of the ancient world you were walking on a dirt road.  The didn’t worry about exhaust from the tour bus in front of them.  The only means of transportation was an animal of burden.  That means everything that an animal does naturally was on that road.  Now for the traveler, there weren’t alot of options for footwear.  Usually a ancient travel was walking with some kind of sandal – a strip of leather lashed around your foot.  By the time you reached your destination and were reclining around the table for the evening meal, your feet were disgusting.

A common courtesy by the host was to offer a foot washing service to the guest.  So, let’s set the plot.  It’s the night Jesus was betrayed – we have come to call it Maundy Thursday, not because it was sad or mournful, but because of Jesus mandautum or command – Love one another.  John and Peter followed Jesus’ instructions and secured the room for the passover feast.  Should they have secured someone to wash everyone’s feet as well?  There was a dispute that broke out among the disciples as to who was the greatest.  Did the topic of the foot-washer come up?  “I don’t want to do it either!”

What must have been running through their minds when Jesus takes off his outer robe, wraps a towel around his waist and grabs the basin of water?  Jesus asks them directly after he is finished, “Do you understand what I have done for you?”  This Ash Wednesday take a moment to see what Jesus did for his disciples and what he accomplished for us.