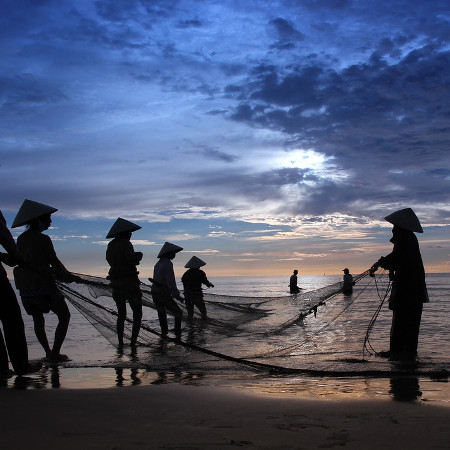 Fishing with Jesus sounds metaphorical – physically we can’t put a rod in Jesus’ hand.  But when we look at the account of the great catch of fish, we how Jesus goes fishing.

First, it’s not the way you would normally go about fishing.  Simon knew that conventional wisdom would say that you shouldn’t drop a net in the middle of a lake during the middle of the day to catch fish.  He was, after all, a commercial fisherman.  That was hard work, with lousy hours.  Think about working the 3rd shift, and then the 1st shift.  Those nets won’t clean themselves!

Jesus knew that if Simon listened he would catch more fish than he could ever have imagined.  That’s exactly what happened.  The reaction that Simon had might seem a little curious.  Simon cowered in fear!  He asked Jesus to leave him.  He was reminded of his sin.  All Jesus did was fill up his nets.  What was it about Jesus that made Simon melt?

Simon knew not only that he had plenty of fish, but that the smell from his life had nothing to do with his occupation.  He was a sinner.  He reeked before he ever stepped out of the fishing boat.  While most of us can plod through life holding up under the weight of our guilt.  When Simon witnessed Jesus called every fish in the lake to fill his net, he was overwhelmed with the thought that he was standing before his maker.  “Go away from me, Lord,”  was his plea to his Savior.

Jesus did no such thing.  In fact he did the opposite!  He gave Simon a job!  He said that he would be a fishing for people.  What would the net look like?  That is the almighty word of God.

Simon followed Jesus’ advice even though it went against his better judgment.  “Because you say so, Jesus.”  Want to hear more about Jesus’ unconventional methods for finding followers?  Watch this Sunday’s sermons taken from Luke 5.