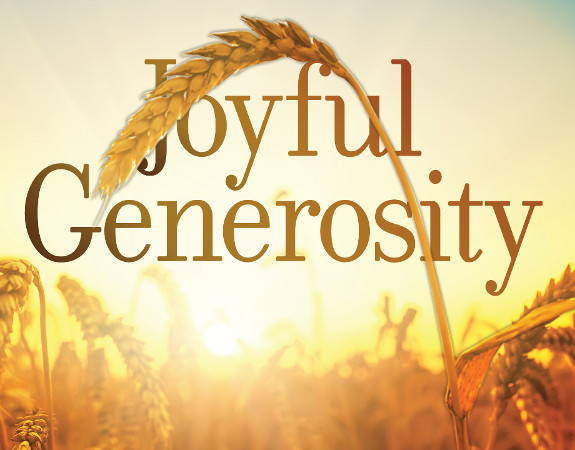 Being joyful and generous is a trait of a Christian.  In our message today we took a look at King David who gave $5 billion in silver and gold towards the building of God’s temple.  That number is hard to get my mind around.  If you didn’t hear the lottery jackpot for tomorrow is set to be $1.6 billion.  All of that money blows my mind.  I wouldn’t know what to do with it even if the government took half in taxes.  It might be fun to imagine, but as we look at King David’s enormous offering we have to ask, how could he be so generous?

The reason a Christian is joyful and generous is because we know God’s grace.  That doesn’t mean that we read about it in a book and can theorize what it’s like.  We have experienced the released of guilt.  The freedom of forgiveness.  King David was an adulterer and a murderer.  God sent the prophet Nathan after him to rescue him from his unrepentance.  David was so grateful!

He wanted to build a home for his God.  David had multiple homes.  Why shouldn’t his God have a really great temple too?  For a couple reasons.  First of those being God didn’t want one!  God told his people to build the tent – the tabernacle.  Second our God doesn’t need a home.  He fills the whole universe with his presence.

God did allow David to gather the supplies to build the temple, but David wouldn’t be the one to build the temple.  That would his son, Solomon’s honor.  David didn’t just gather supplies, in Psalm 30 he wrote the dedication prayer for the temple.  He knew that this gift to God might not further his kingdom, but it would further God’s.

Have you ever wondered how much it costs to start a church?  What kinds of ministries around the world could you support?  At this time there are more than 300 seminarians around the world in different countries studying for full time public ministry.  Maybe God could use you to help?  Want to hear more?  Watch this Sunday’s message taken from 1 Chronicles 29, our final from our stewardship program, Joyful Generosity.