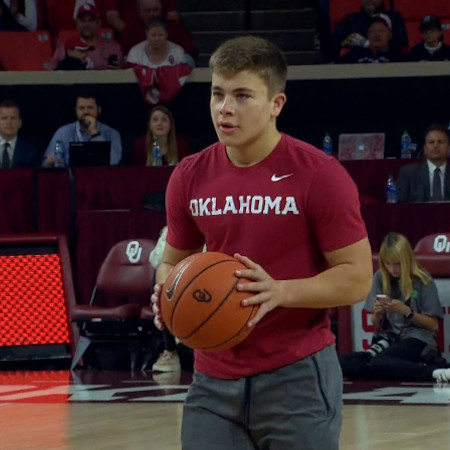 Has God blessed you with more or less this year?  You might try and stop me to say – is it really a blessing from God to receive less from his hand?  Absolutely!  Let’s work this out.

God’s people were about to enter the Promised Land – finally – after a forty year walk through the wilderness.  Deuteronomy was Moses’ last chance to warn God’s people of the temptations they would face from being in a land of plenty.  They had been blessed with less and God was about to bless them with more – much more.  The danger was that they might wrongly think it was their skill, might, intelligence that accomplished their new found wealth.  The truth is that it is God who gives us everything!  Let’s look at a few examples.

This young man just hit a half court shot.  And for doing so, Cale Montis was given a year’s worth of free tuition!  That’s quite a reward.  You could easily say that God has blessed him with more.  College debt can be crushing, and now instead of having four years of it, he only has to worry about three!  That’s great.  Why do you think that God gave him this blessing?  Let me throw out a few incorrect reasons.

God loves Cale because of who he is!  He has lived a “good Christian” life.  He’s witnessed to God’s greatness everywhere.  God must truly love him because God allowed him to hit that half court shot.  OR there is another line of incorrect reasoning.  Cale has worked hard at the game of basketball his whole life.  I don’t know that God had anything to do with hitting that shot.  He practiced that very shot many times and, you know what, the only one who deserves credit for hitting that shot is Cale.  Not God or anyone else – that was all Cale.

Both of those those thoughts – God likes me more and it had nothing to do with God are incorrect.  Now let’s try this again – only playing it out because he missed.

That young man just missed his half court shot.  Sure the chances weren’t that great that he would make it in the first place, but still he had the chance.  Do you think there was something that he did, some reason why he missed it?  Do you think that God was mad at him for the way that he had lived?  Maybe God no longer cares about Cale.

Let’s wrap up all of this and put a bow on it.  First why does God give you anything at all?  What do you have to offer God?  You have nothing to offer God.  You are a beggar before him.  Even one sin damns a soul to hell.  Do you honestly think that knowing how to play a game like basketball or paying God lip service a few times earns you a place in God’s heart?!  No.  From a cosmic view of our lives – standing back from a distance, God always blesses us with more.  We don’t deserve anything from his gracious hand.  The truth is that God is merciful and loving.  You can’t tell that necessarily from the daily ups (WAY ups if you’re Cale) or downs (those can be way down – we live in a veil of tears).  Go back to God’s word.  Find that he doesn’t treat us as our sins deserve!  There is no condemnation for those who are in Christ Jesus.  The sun shines on the righteous and the wicked.  God loves you in Jesus perfectly.

Why would God give you less?  He tell us in Deuteronomy.  To humble and test you.  Everything in this world holds together because of Christ the King’s power and grace – including your life.  God might remove a blessing to remind us, to redirect us, back to him.  That is an incredible blessing!  I know that it is often in the times of want that I appreciate what I have even when it is less.  Check out the prayer from our Thanksgiving worship service to see a few examples.