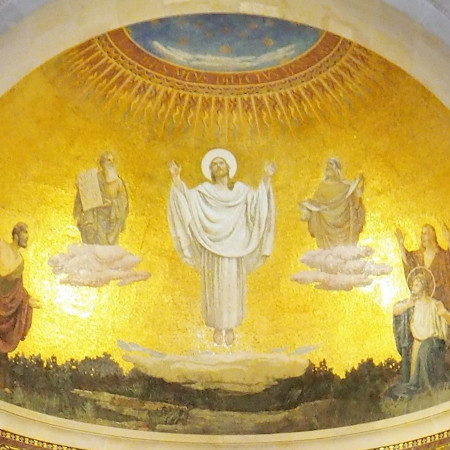 The Glory of the Lord is a huge concept.  For our purposes on Transfiguration we’ll dip our toe into the water and compare the Law and the Gospel.  The Text from Exodus 34 is striking for a few reasons.

First, any window into the lives of the Old Testament Christians is fascinating.  I don’t think we can imagine what it’s like to have God as our government.  I suppose there are a few in our nation who would shudder to think about that reality, but wouldn’t it be great to know the different things that we wouldn’t have to worry about?  No enemies could attack (even though that happened to Israel).  There would always be food and water (even though Israel complained about this routinely).  Before any kind of electronics no one was lost because God led his people through a pillar of cloud by day and a pillar of fire by night.  Talk about a night light!

Second, Moses would go in and talk to God.  That’s not as amazing as it sounds since we can approach the heavenly throne with confidence and pray to God about anything at anytime.  However, after we’re done praying our complexion isn’t altared by God’s glory.  Moses’ face was different.  I don’t know if it glowed after bring in the presence of God or exactly how it looked, but it was different.  So much so that when Moses returned to the Israelite camp with two new stone tablets people wouldn’t go near him.  His face was glowing.  It was for that reason Moses put a veil over his face.  At least that’s the reason recorded for us in Exodus.

When Paul comments on this text in 2 Corinthians 3 about he gives another detail.  Moses wore the veil so as to not scare the children, but he also didn’t want the people to see that the glory of God was fading in the Law.  It is in the Gospel that God’s glory shines without ceasing!

Want to hear about how God is perfectly just and perfectly loving in Jesus?  Please watch our Transfiguration sermon taken from Exodus 34.