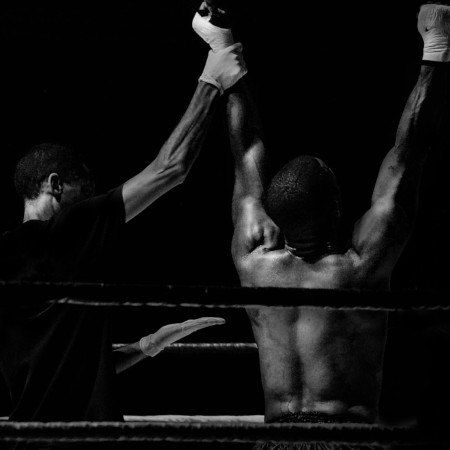 What does a victory look like?  Last year my son wrestled in a number of matches.  There were times I couldn’t make it to a match and I had another parent record the match for me.  I still don’t understand the sport very well, but I can track a little.  At the end of every match the wrestlers shake hands and the referee raises the hand of the victor.  It’s obvious who wins.  Early on I would watch a video recorded by another parent, but over and over again the parent wouldn’t record the shaking of the hands and the raising of the hand of the winning wrestler.  Often I wouldn’t know who won.  It was frustrating.  The matches were often close.  I couldn’t count the points easily.  In some arenas there is no scoreboard for the crowds.

When the prophet Isaiah says that God wins, he fast forwards us to the end of our lives to see only the hand raised in victory.  The comfort for us is that we know how our story will end.  We win the victory!  When God raises Jesus hand in victory, ours went up with him by faith.  All of our sins rested on his shoulders when he died on the cross.  The challenge in Lent is that the crucifixion looks like anything but a victory.  It was in death that Jesus took our punishment and left us with his perfection.

When you are tempted to get frustrated because there is a certain part of your life that looks a little rough, take comfort in knowing that God has the end already planned out for you.  You can’t see how your life ends up, but your God can.  He tells us that we win the victory in Jesus.