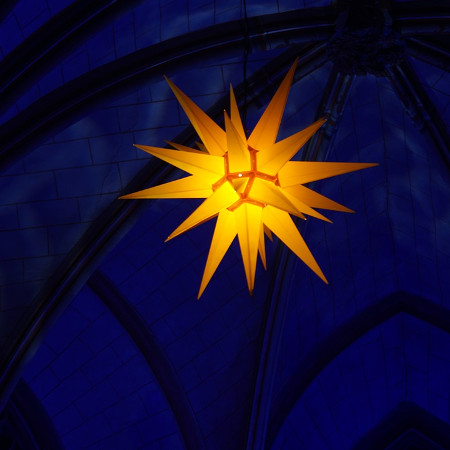 There is was.  You’ll never forget the day that you saw it.  After all, you had made a living watching the stars.  There was a rhythm to the heavens.  They were a giant clock.  To be sure, some things were more rare – a comet here, and eclipse there, you could spot something out of the ordinary.  And there it was.  There was no record of anything like it ever, but there was record the prophecy.

Going back more than 500 years to the writings of one of the Jewish exiles named Daniel.  He wrote many things about his God.  This God of the Jews was so different.  To be sure he demanded perfection.  There was the prescribed religion.  But when it came to followers being worthy there was really only one way.  There were sacrifices and other offerings, prayer, etc. that could be offered to the God of the Hebrews.  When it came to you being worthy, it was the God who made you worthy.  This God was going to come and live in your place and die in your place.  A God who would die for his subjects?  It’s hard to understand a divine love like that!  And yet there is was!

This sign in the heavens marked the birth of God.  What choice did you have?  Time to get the camels ready!

Now that you’ve slipped into the shoes of the Wise Men from the East for a minute, consider watching the Sermon from Sunday based on Matthew 2.  Walk with the Magi from their homeland to the city of the king, Jerusalem, to David’s city, Bethlehem.  Explore what a difference the Christ child makes in your life.