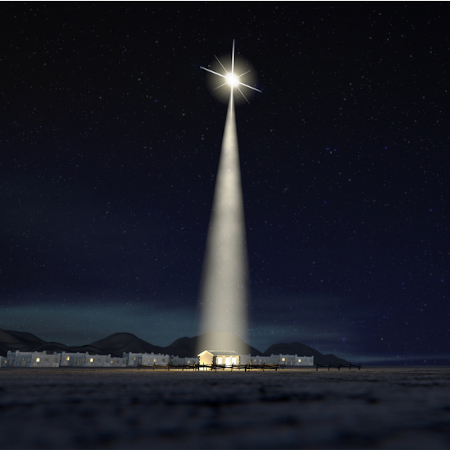 A far off Christmas fits the theme this week!  Last week we heard when Jesus was coming – when the time had fully come! The world was ready for Jesus some two thousand years ago. What about where? Today we explore what the ancients knew about the location of the coming Savior.

The location of God biggest promise might be a BIG detail.  You might say people should be camping out waiting for it to happen, but God’s people were distracted.  How distracted, you might ask?  When at least three wise men show up (we assume there were three because they bore three gifts) in Jerusalem and flat out ASK WHERE the king of the Jews is who was recently born, no one seemed to care.  To be sure, the teachers of the Law knew exactly where he was to be born!  This wasn’t a hard question to answer.  The fifth chapter of the prophet Micah helps us out.

But you, Bethlehem Ephrathah, though you are small among the clans of Judah, out of you will come for me one who will be ruler over Israel, whose origins are from of old, from ancient times.

That seems to be easy enough, right?  Well, sort of.  This isn’t the end of the story for the Savior of the world!  You see the reigning king was a godless, blood thirsty tyrant.  How bad could he be?  Upon his own death he had a standing order that prominent beloved people in the city should be arrest and executed so there wouldn’t be celebrations that he was finally gone.  He knew he wasn’t just feared, but hated.  THIS is the guy who ordered the slaughter of the innocents.  THIS is the guy who prompted the flight to Egypt by Jesus’ family (which God happened to easily finance by three gifts from the Magi).  THIS is why Jesus was called a Nazarene.  The Scriptural origins for that location are more complicated.  For that answer you’ll have to watch Sunday’s Bible class – the second in our Advent series – A Far Off Christmas.