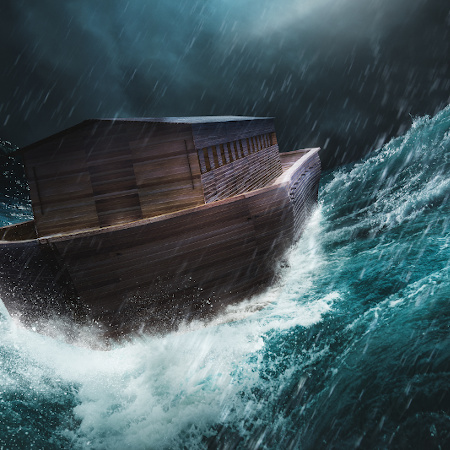 Looking at Genesis 6-7 and the flood is a sobering study.  What would it be like if EVERYONE, not just that you knew, but everyone who was not in your family was gone.  That was the sobering reality that Noah faced when he was told to build the Ark.  What about that ark?  Rapidly approaching two football fields in length and half as wide, four stories tall, with three decks, the ark was enormous.  Then you have to consider that Noah built it by hand.  We don’t know exactly what technology Noah and his sons had at their disposal, but this was an enormous project.  That’s just the boat!

I don’t spend too much time on the animals that God sent Noah’s direction – two-by-two.  There were more of the clean animals both for food and for worship.  That’s not something that you would find in your kid’s Playmobile ark set.

The Bible talks about how water came up from springs in the earth and how it rained for forty days.  There are some who believe that there as a “canopy” above the earth creating a.  Answers in Genesis attempts to push back on that theory.

The last place we went in our study was to a different kind of flood.  Peter writes in his first letter – God waited patiently in the days of Noah while the ark was being built. In it only a few people, eight in all, were saved through water, and this water symbolizes baptism that now saves you also—not the removal of dirt from the body but the pledgee of a good conscience toward God.  Holy Baptism is a washing of rebirth and renewal by God’s power.  At a very basic level, I ask people if God is doing something for us in baptism, or are we doing something for God.  The arrow is pointing down.  God is the one who saves us, creates faith, and yes, washes our sins away in the flood of baptism.  Want to hear more?  Watch this week’s Bible study from Genesis 6-7, the flood.