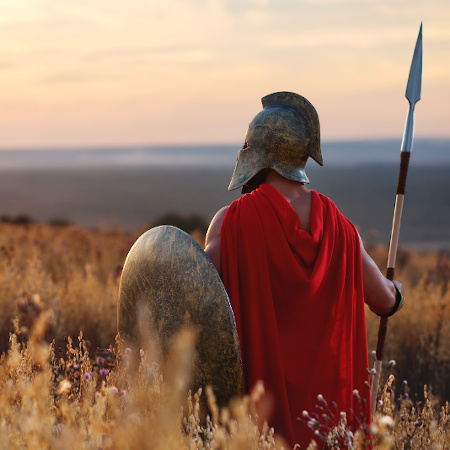 Fellow Soldiers of the Cross, we are in a life and death struggle against powers that are out of this world and way beyond our abilities.  We wouldn’t stand a chance on our own.  We are not alone.

You’ll have a chance to watch the sermon on the pieces of the armor.  I want to spend some time right now on our enemy, or should I say, the public opinion about our enemy.

The Greek of Paul’s letter to the Ephesians says this is not against blood and flesh.  That’s not how we speak, but to my ears that’s striking.  If you find yourself in the 67% from 2009 Barna survey, just to be clear, we are talking about spirits.  Our God would agree with Velma when she says there’s no such thing as ghosts.  We’re talking about evil angels, demons.  This is how Paul describes them in 6:12 but against the rulers, against the authorities, against the powers of this dark world and against the spiritual forces of evil in the heavenly realms.  Let’s break it down.  There are ranks of angels, ruling ones – we know his name, Satan – the accuser.  There are demons whose goal it is to attack you, and there are demons who are just wicked, they carry out any and everything evil.

In the first chapter of this letter to the Ephesian Christians Paul wrote, the ruler of the kingdom of the air—the spirit who is now at work in those who are disobedient.  In Christ you are no longer subject to these forces, but that doesn’t mean they have given up.  Therefore put on the full armor of God, so that when the day of evil comes, you may be able to stand your ground, and after you have done everything, to stand.  The problem is that you know that the spiritual enemy is coming, but you don’t know when.  That calls for constant vigilance; that can be exhausting.  It’s hard to always have your guard up.  Our God doesn’t leave us defenseless.

Want to hear about the full armor of God, fellow Soldiers of the Cross?  Watch this week’s message taken from Ephesians 6.